Plans for a new affordable eco-housing scheme in Thurlestone have been given the go ahead by South Hams District Council.

Plans for a new affordable eco-housing scheme in Thurlestone have been given the go ahead by South Hams District Council. The scheme will provide four new three-bedroom homes on former council-owned land at Parkfield. It was approved at South Hams Dis

South Devon Rural Housing Association has been hard at work in 2015. It has partnered local award-winning company 'Tresoc' in the 'S.H.I.N.E.' project - installation of solar panels on a large part of it's housing stock. Residents were delighted to be p
26th November 2015

What is it? The App can be used to view and bid for homes being advertised on Devon Home Choice, and check the progress of previous bids. Downloading the App The App can be downloaded onto: - Android phones or tablets from the Play Store by usi
4th November 2015

The Community Housing Project at Moreleigh finally gets underway. After many delays with planning and other conditions, work has started on the first block of four homes for rent to local people.
15th October 2015

The demand for accommodation at our newly refurbished Care Home, Fordere Lane House, has exceeded our expectations and only has two rooms remaining.

Planning has recently been approved for the conversion of Avondale House, South Brent into 6 much needed family homes for local people. The former school (most recently used as accomodation for homeless people) is to be refurbished and converted into

The newly refurbished Forder Lane House Care Home is having an open day on 22 September 2012 from 10am to 4pm. Entertainment and refreshments will be served all day. Soup and Roll for Lunch - Cream Tea's in the afternoon and light refreshm,ents all da

Planning permission for the redevelopment of Brimhay Bungalows was approved by South Hams District Council Yesterday. An innovative Community Lead Housing Development soon to be on site in Moreleigh.
18th June 2015 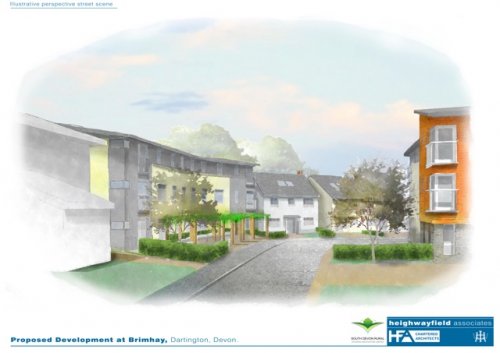